You are here: Home / TOOLS & TIPS / THE ONE FOLDER YOU MUST MAKE FOR STUDENT OR SHARED IPADS IN YOUR CLASSROOM
Tweet
Pin924
Share33

One way I organize student and teacher iPads is by creating folders on the iPad to store various apps. Setting up iPads for elementary students involves a lot of trial and error as you decide which evergreen apps work for your students and which iPad settings you want to adjust.   Learn the MOST important app folder you want to make on each iPad and how to use it. 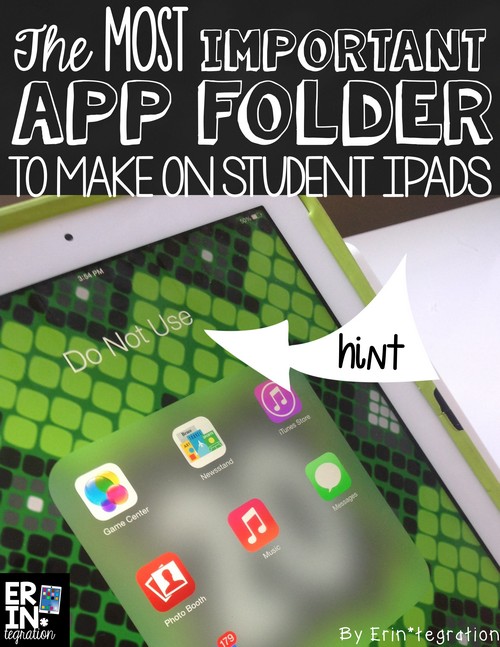 This iPad tip was brought about in the dark ages when I just had one iPad to share with the whole class.  I’m being dramatic and somewhat disingenuous because about half of this blog was composed in those “dark ages” so clearly you can accomplish a lot with just one iPad as long as you are creative with centers, organization and management.

Create a DO NOT USE FOLDER on the iPad

Anyway, when I only had the one iPad, there were some apps, such as YouTube, that I wanted to have access to, but I did not want my students to use.  At first I kept deleting them when students were going to use the iPad, then I would reinstall them when I needed.  I thought, “There has to be a better way!” and the Do Not Use folder was born. 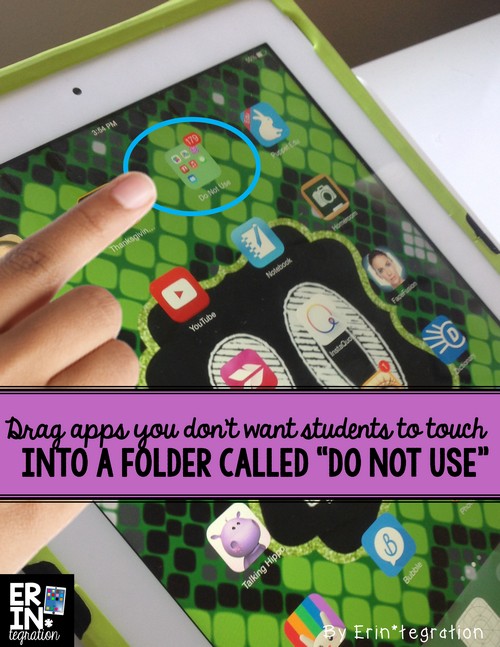 Basically, I would drag any of the apps I did not want my students to access into the folder.  Labeling it “Do Not Use” was my way of reminding students not to open the folder or touch any of the apps inside it.  Short and to the point, the Do Not Use folder was incredibly helpful in managing a one iPad classroom.

Flash-forward a few years later, and while not 1:1, we have access to a class set of iPads.  In the beginning of the year when I set up each iPad with an iPad rules lockscreen and numbered background, such as the awesome snakeskin one pictured above and available {here}, I also create a Do Not Use folder on each student iPad.  I drag apps like Messenger, Facetime, Email, Newsstand, the Game Center, and iTunes into the folder.    With younger students you may want to drag the App Store into the folder, too.

As with any management strategy, clear explanations and expectations are key to the folder’s power.  I tell students exactly what apps are in the folder to take away the mystique and I explain why I have put them in there.  Most of these apps have been disabled on our iPads anyway, but since we can not delete them, it helps the visual clutter to have them all in one spot too.

Those of you lucky enough to have 1:1 may have students that are using those apps at home.  You can call your folder “Not at School” or “Home Only” for clarity.

How to create a folders on the iPad

To make a folder, hold the circle home button on the iPad until the apps all get shaky.  Touch an app you want to put into the folder and drag it on top of another app you would also like to place into the folder too.  You will notice that a folder magically appears.  You can touch the title to rename it and done to set it.  One the folder is made, you just need to drag other apps over top of it.

I also use folders for the different subject areas.  What kinds of folders do you use?

With the latest iOS 10 update, you now have the ability to remove some of those pesky apps from the iPad!  However, don’t get ride of your DO NOT USE folder yet because there are still apps you will want to drag in there for student apps since it won’t allow you to delete everyday.  The DO NOT USE folder is still very important in a single iPad classroom as you may have teacher apps you want to keep separate.