HAVE AN IPAD APP DRAFT IN THE CLASSROOM

You are here: Home / iPAD ACTIVITIES / HAVE AN IPAD APP DRAFT IN THE CLASSROOM
Tweet
Pin121
Share19

Are you looking to add more student choice into your classroom? Have an iPad App Draft and allow students to choose the apps to use in projects. The App Draft is an engaging and app-smashing way to encourage creativity and critical thinking. Learn how I set up and run an App Draft plus download the apps, student recording sheets, and draft picks for FREE when you subscribe to Erintegration. 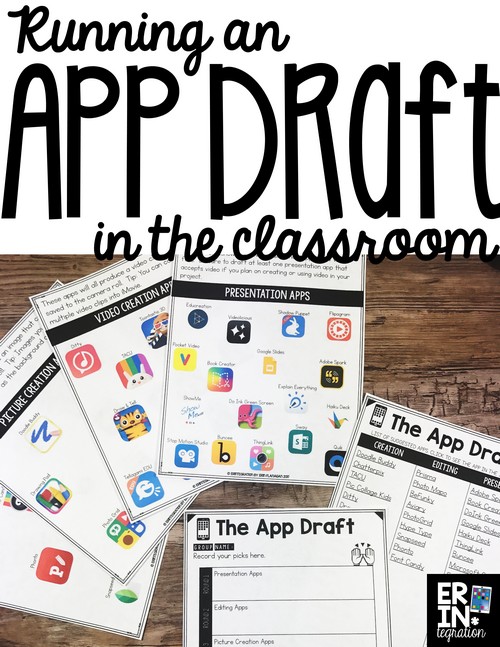 WHAT IS THE APP DRAFT?

The App Draft is inspired by the draft process that professional sports or fantasy leagues use to create their teams. There is a pool of candidates and various teams take turns choosing from the pool to create a team. But in the App Draft, teams are selecting apps, not people, to add to their “team” to use. After drafting their apps, team members may only use the apps on their team to create their projects.

WHY HAVE AN APP DRAFT?

Student choice is key to engagement. However, students still need scaffolding. By having students choose from a pool of apps to use, you are giving them choice but still supporting them.

The App Draft also pushes students out of their comfort zone. Even the most tech-savvy kids can settle into using the same few apps. Students must think creatively about how to combine their “team” of apps into a finished project!

The App Draft is the perfect way to practice or introduce App Smashing. Also since different teams have access to different apps, each project will be a little different.

WHEN TO USE THE APP DRAFT

You can use the App Draft anytime you want students to create a project on the iPad! However, the App Draft works best when students are familiar with some of the apps on the list. If some apps are new, that is ok, as they can use their technology fluency to figure it out! 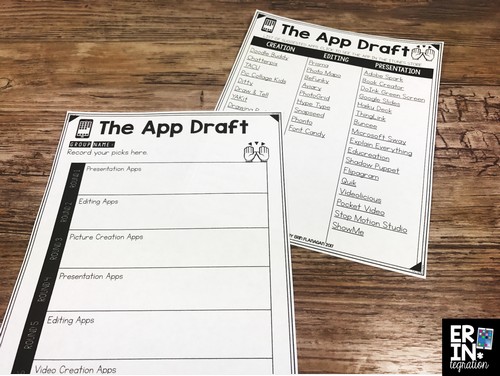 Some projects will work better with the App Draft.

Here is a short list of suggested times to have The App Draft:

SET UP THE APP DRAFT

SET SOME GROUND RULES FOR THE APP DRAFT

Will you allow trades?  Do students have to use ALL the apps on their finished teams?  Can students pull “free agent” apps that were not on the original list? Can more than one group use the same app?

I allowed trades and free agents.  I also did NOT make students use EVERY app on their team.  The first time we did an App Draft I allowed groups to “release” apps like Pic Collage that they were very familiar with to other teams that felt they needed it. Plus sometimes students get an idea while working on their creation and need a specific app to pull it off.

The point of the App Draft is to encourage creativity, innovation and problem solving – NOT to stress anyone out.

You might already have a rubric for your project, but you will want some sort of checklist or “must have” list for students to refer to.  This will be project-specific, but some things I like to address are:

ROUNDS IN THE APP DRAFT

Once everything is set up, start your App Draft.  I broke the draft into rounds.  Each round, students were choosing a different type of app.  I made sure to have more apps in each round than groups in case we did trades at the end. 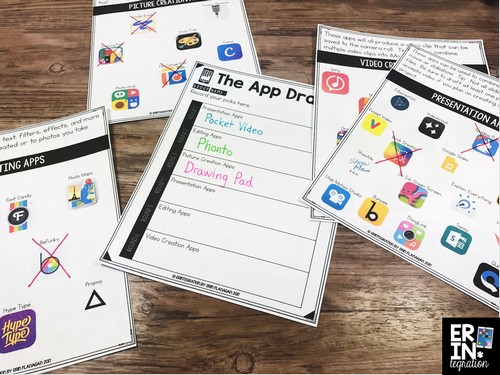 By dividing up the apps into rounds, I could also make sure students ended up with a balanced team of apps.  Ideally, students will have several creation apps, an editing app, and a presentation app.  That way they can use their creation apps to make content, the editing app to add text or other details, and the presentation app to put it all together.

I also had students choose a presentation app FIRST.  That way they could tailor their first creation & editing app pic around the mode of presentation.

I allowed students to use the camera app, Google Drive and iMovie as well.  The camera app is essential as the camera roll is where most of the pieces of the presentation are shared.  I allowed iMovie for any hacks – especially for combining video clips and images.  Finally, we uploaded to Google Drive when finished.  If your class shares work via Seesaw, you may want to include that as an app that all teams can use.

Students take The App Draft very seriously so make sure you specify this all up front!

I created all of the sheets in this post to help the App Draft run smoothly.  First, I have a clickable list of apps to get you started.  Some are paid, but most are free.  I divided these apps into categories: creation image, creation video, editing, and presentation.  I then made mini posters of the draft picks to display.  We crossed off the apps as teams picked them.  Finally, I included a student recording sheet for group members to keep track of the round and what apps they chose. 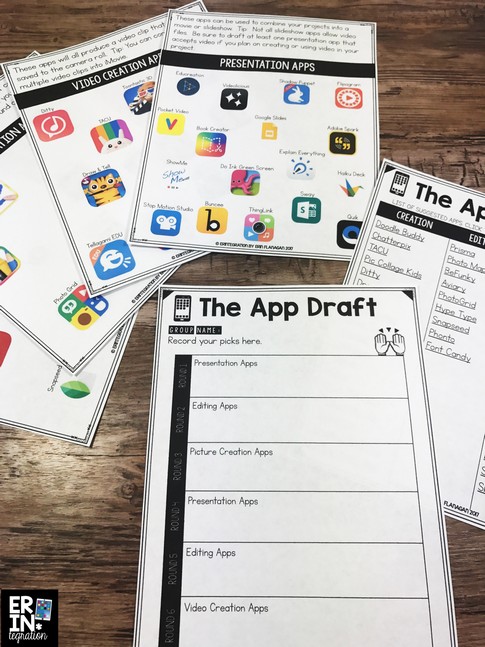 Did your favorite app(s) make the cut?  Reach out to me on social media and let me know which apps were your picks in The App Draft!