This week I used a workhorse app called GoodNotes which basically allows you to write on any PDF file on your iPad.  I say workhorse because with an Apple TV and some type of cloud storage (I used Google Drive but Dropbox would work well too) I can now access and write on any of the documents I have created with the option to project to the class. 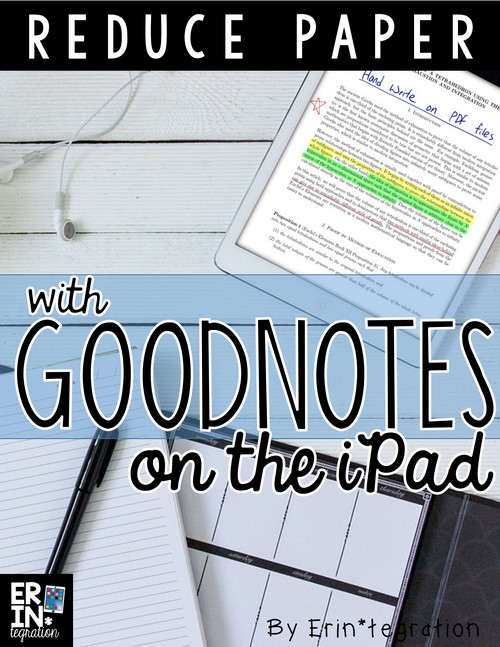 First you need to save your document(s) as a PDF and store them in your cloud storage area of choice.  Next you open the app GoodNotes on your ipad and from the app it can access your cloud drive.  It stores your various documents on a bookcase to access later.

Use GoodNotes in Guided Reading

Since the app cost money, I only have it loaded on one iPad, but it was still incredibly useful.  I saved a bunch of graphic organizers I made on Word and students were able to write directly on them during guided reading.  No photocopying and no papers to worry about later. We called the pages “work pads.”

I also opened documents on GoodNotes and projected them.  I could model how to fill in a page or, as in my lesson example, how to fill in a graphic organizer.  My iPad was functioning like an overhead projector but without all of the prep.  I also scanned several pages from a book and saved those as a PDF so I could write on them too.

When to Use GoodNotes

I have read about classes that have 1:1 iPads for students all day using GoodNotes to go completely paperless.  For younger students, I would not substitute the app for paper and workbooks mostly because the worksheet is smaller on the iPad and can be difficult to fill out even with the zoom in feature.   However for a teacher tool and for note taking, graphic organizers, and labeling, it definitely was better than traditional methods. I would suggest investing in a stylus too.

Do you use annotation apps in the classroom?  Share your preferences in the comments! With younger students we use Skitch and Paperport notes, but as an adult I prefer GoodNotes.