EMOJI APPS FOR THE CLASSROOM

I’m sharing my favorite free Emoji apps for the classroom that use Emojis in interesting ways on the iPad.  These free Emoji apps can be used in math, spelling, as centers, brain breaks, or just for fun! 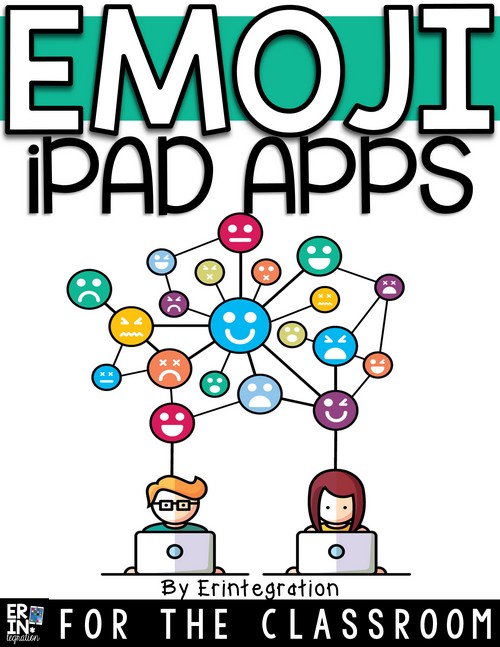 I love finding ideas and items to incorporate Emojis into the classroom!  Here are some iPad apps – all free – that feature Emojis in some way.

Keep in mind that like many free iPad apps, there are ads on some of the apps in this list and occasionally buttons on the menu screen to “upgrade.”  I always include a mini lesson on digital citizenship as well as technology fluency when introducing a new app or tech routine into the classroom.  Rather than ban free apps with ads outright, it is important for students to know what to do when they see an app (click X usually) and how to tell something is an ad versus part of the game.  Be sure to test it out and decide for yourself if it will work in your classroom!

We use Emoji Draw to practice writing spelling and site words on the iPad. 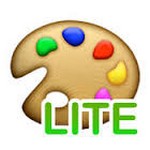 Multisensory word study stresses the importance of muscle memory when studying patterns.  I’m always looking for novels ways to motivate students to trace or write their spelling words.  Check out the Emoji Draw app here.  You can print the direction sheet from my Emoji Draw spelling activity in a word work center so students can work on the app independently. 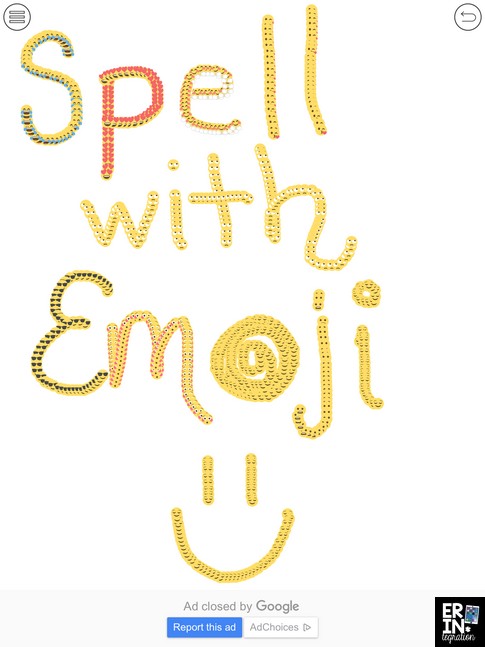 Students can swap out what Emojis to use on the app.  All of the Emojis are available so you might want to include a class rule about which Emojis are not to be used (the gun, alcohol, cigarettes, bomb to start). 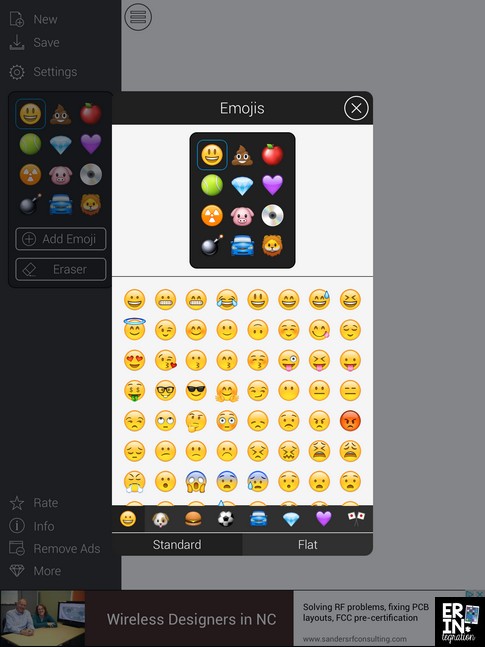 This is also part of a larger iPad Spelling activity bundle with 15 free apps and directions.  The bundle includes a spelling choice menu so students can choose how to practice their words on the iPads.

This free Emoji app comes with set of puzzles where you are challenged to find the Emoji that does not match. 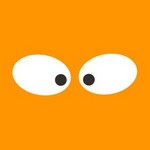 The Emojis are set up in a grid and the you need to find the “odd man out” essentially as the timer counts down. 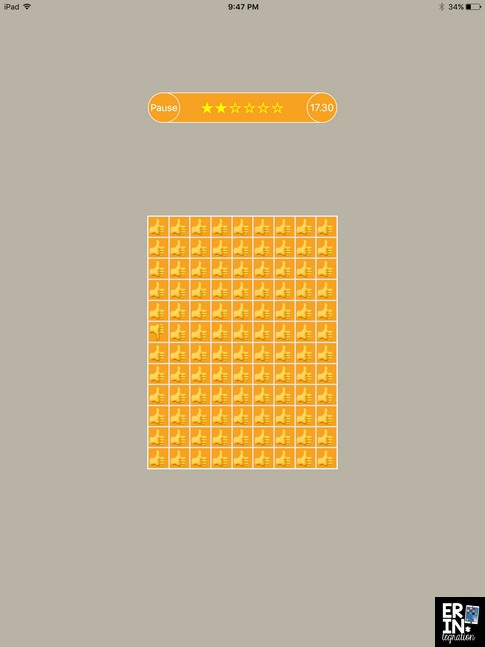 As you play, the grid gets smaller and smaller. You can even touch the Globe button and pick your own two Emojis to use. 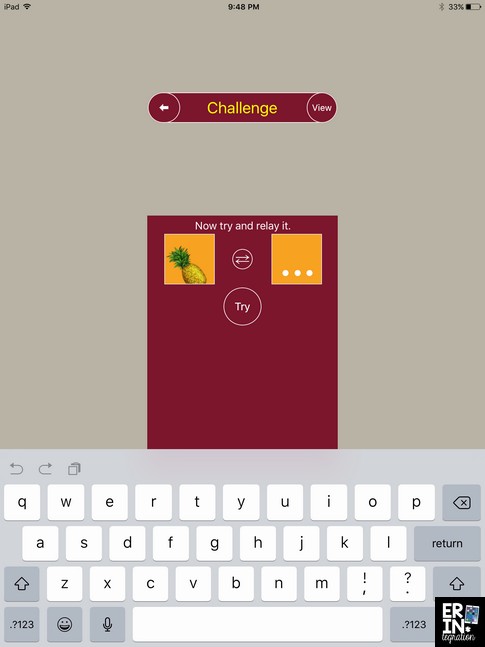 Tie it into visual discrimination practice – a key component of early literacy – or as a compare and contrast activity with this free Emoji Venn Diagram cut and paste activity.

Use the Emoji Me Kids iPad app to design your own animated Emojis. 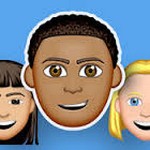 These can be saved to the camera roll or take a screen shot and crop to use as an avatar online. 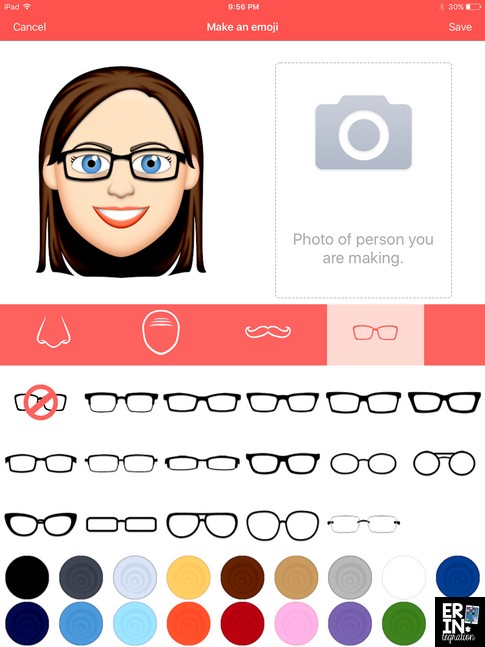 The kids version is ad-free and includes many choices for skin color, hair style, eyes and more.  Students will love seeing the various animations once they finish creating their Emoji.

I created my own winter Emoji Sudoku for my iPad Christmas Countdown activity and we loved it so much, I went searching for an app that uses Emojis to solve Sudoku puzzles.  Amazing Emoji Sudoko Collection and Sukoku It both fit the bill. 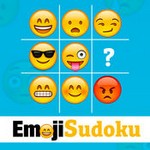 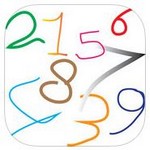 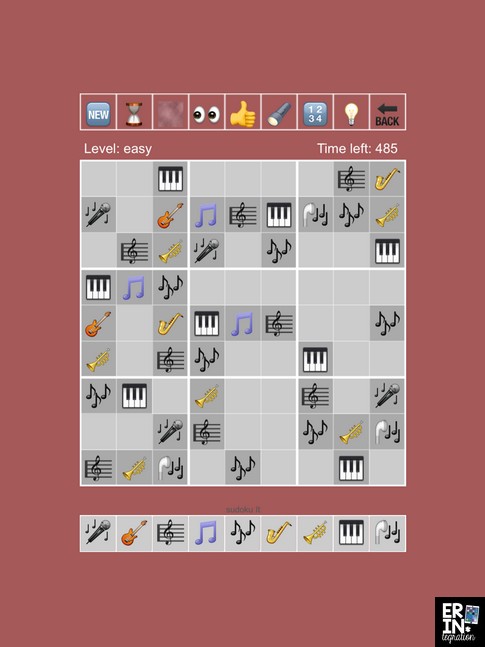 These are bit more challenging as the puzzles are larger and timed.  However, it does offer hints as you play – if you put down an Emoji that absolutely won’t work, it turns red. 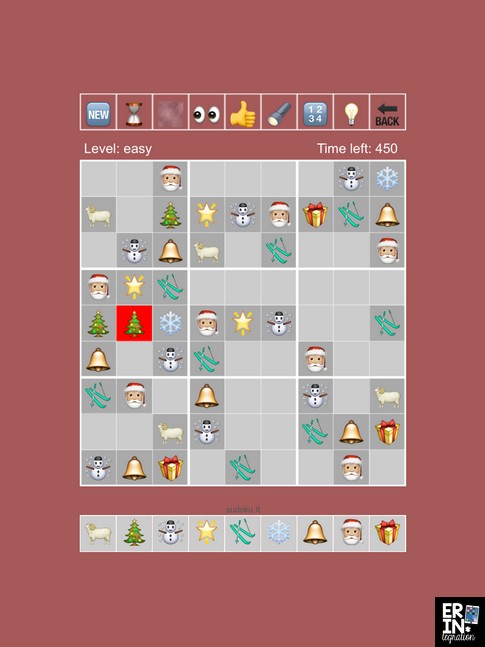 This helps students ease into the game as they learn what works and doesn’t. 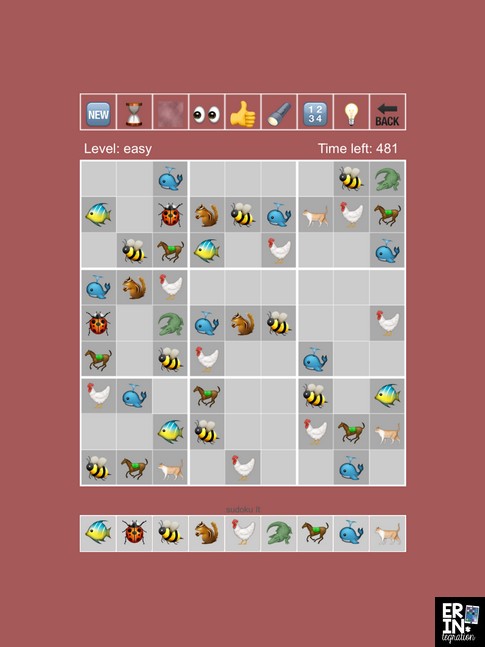 You can change what kinds of Emojis display with the Eye Emoji icon.  Sudoku is an engaging way to introduce trial and error and logic into the classroom.

Somewhat embarrassing confession…several years ago (ok it was more recently than I’ll admit on this blog) I bought a Webkinz (remember those?!?!) just to access the digital version of Mahjong in the game area.  I loved that it had icons of animals on the tiles.  If you are confident enough to admit that you too played the Webkinz Mahjong, you will most likely remember the awesome Egytian sounding music that played too.

Anyway, when I found an iPad app to play Mahjong with Emojis on the tiles, I was so excited!  There are actually several but I like Emoji Mahjong HD app since there are versions for the iPad too.  You can also get crazy and play the 3D version, which is definitely a novel way to introduce spacial relation or even volume in math. 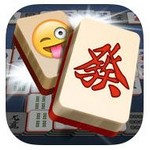 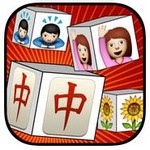 To access the Emoji tiles, you need to touch the settings gear icon then touch tile style and choose Emojis. 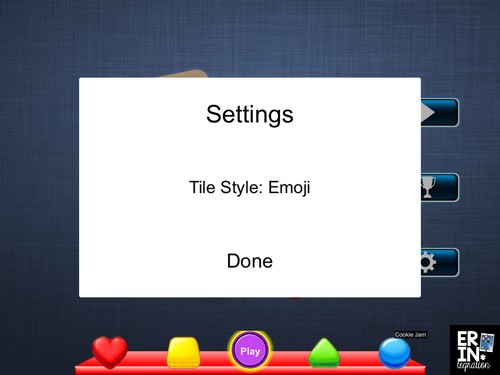 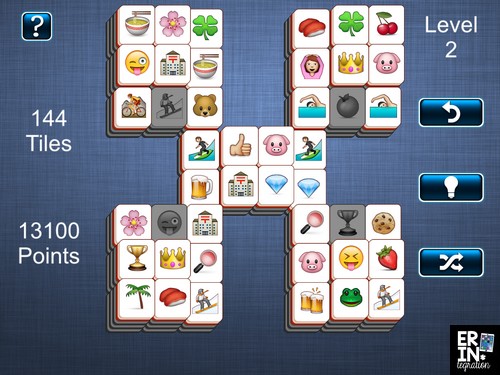 One caveat is the “beer glass” Emoji is used.  However, my students have always referred to it as the root beer Emoji (I know I need to thank a fast-thinking parent for that one) so feel free to use that same language. 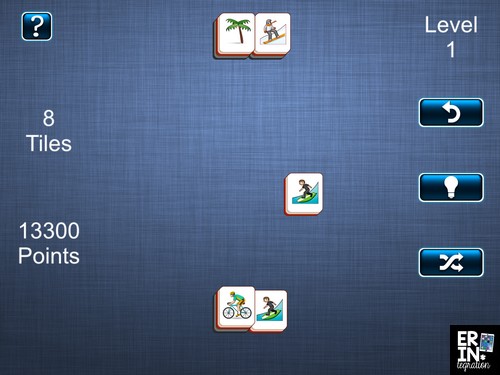 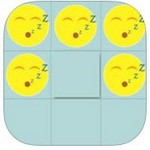 The premise is simple but it gets tricky quickly.  Basically, you need to stack Emojis on top of each other.  Emojis can only slide up and down on the grid. 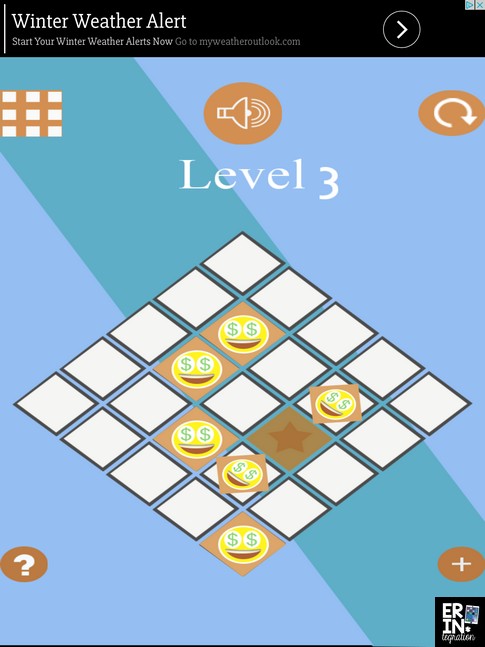 Touching an empty grid space will cause the Emojis that can move there to wiggle.  It is very similar to the peg board games where you are hoping pegs over each other and trying to have one left.

The Count the Emoji app is meant for young students K-1. 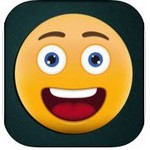 Work on subitizing and counting skills with this simple app.  Basically Emojis move around the screen and you need to touch how many there are. 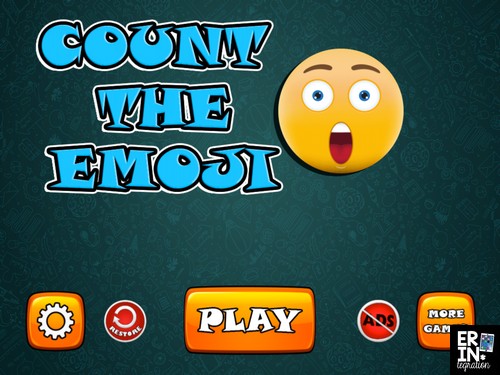 At times these big, mean Emojis come to cover up what you are counting and sometimes things move too! 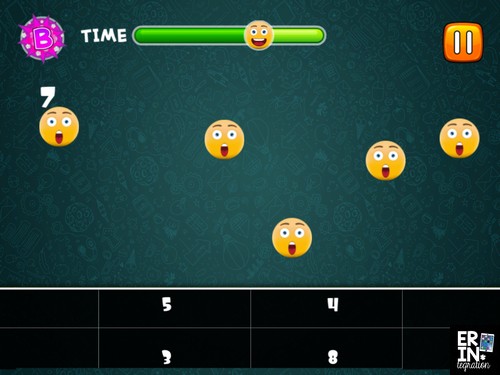 The downside to this app is the numbers that you touch are written in a weird font so be aware of that if you use this game in a math center.

Pic Collage or the ad-free Pic Collage Kids is by far my favorite app for creating and using with primary students.  I create many resources that use Pic Collage and the Emoji keyboard to summarize, graph, vote, write poetry, and more. 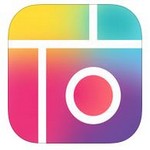 However, I recently discovered the Pic Collage can be hacked so that students can draw their own transparent clips. Learn more about how to use the Draw tool on Pic Collage here. 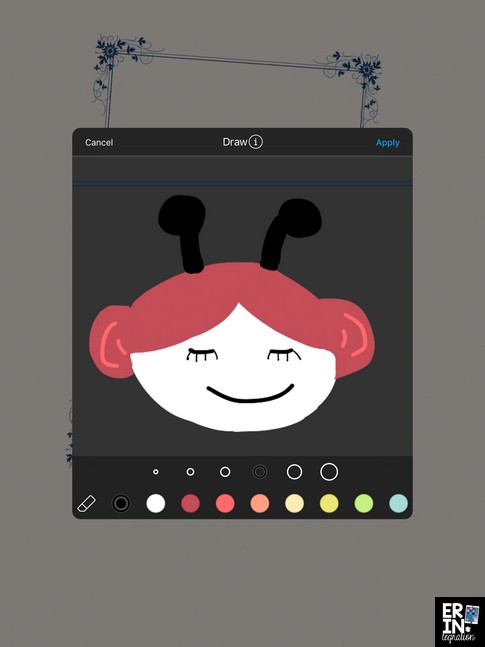 Using this hack, students can design their own Emoji that can be dragged anywhere on the canvas. 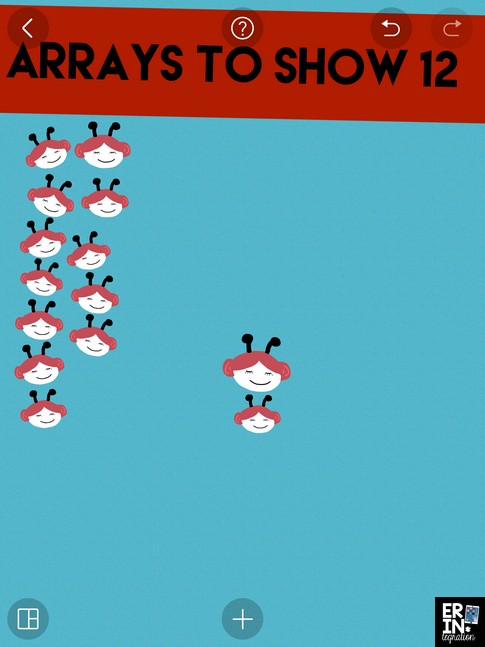 They can easily duplicate it for a variety of math activities too.

The free iPad app Byte has a bunch of options, but by far the best is the Emoji music maker part of the app. 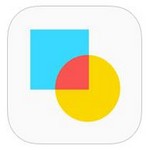 First a few quick things to note. Byte is free and actually does a lot more than create songs with Emojis.  It is similar to PicCollage in that you can add photos, text, stickers, GIFs, and backgrounds to a template.  Byte also allows you to add videos, drawings, and a song to the template.  I don’t find the collage part as intuitive or as attractive as Pic Collage and we rarely use it for this purpose.

The song element just happens to be a beat maker that uses Emojis to make various sounds.  Which should TOTALLY BE IT’S OWN STANDALONE APP BYTE DEVELOPERS because it is awesome.

Seriously – check out a video tour I did of the app here and how we use it to synthesize during reading:

Now for the downsides of using Byte in a classroom setting.  First of all, it will not let you save your Bytes to the camera roll.  They are stored to your account, which brings me to the second downside.  Byte is a social sharing type app like Pic Collage so if you have an account, you can share your Bytes with others, view Bytes, and rate them.  Like Pic Collage you can opt not to do this so I just had my students make a Byte sans account.  BUT at least Pic Collage gives the option of blocking the gallery and even has the Kids version the removes all of this completely.

Our workaround was to film each other’s Bytes and upload them Google Drive to watch.  It was not a big deal to do it that way, but was an extra step.  However, did you SEE the Emoji music maker – it is worth the trouble!

In addition to the synthesize lesson explained above, we made theme songs at the end of the year to walk the red-carpet too when receiving their end-of-year gift.

Get the Synthesizing on the iPad resource here or check out the bundle of all of my iPad reading activities featuring anchor charts, graphic organizers, and app direction sheets to integrate iPads into reading all year.

Looking for more education apps to use in the classroom?  I’ve teamed up with my Tech with Us team to share some apps and lessons for K-12.  Click the image to view the roundup! 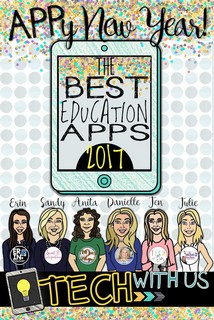 I actually have even more Emoji apps for the classroom and Emoji-fied versions of games for the iPad to share and will be creating a follow up post soon! Be sure to connect with me on social media to see links to my latest posts and check back on Erintegration for everything Emoji in the classroom!